Are Virtual Machines the New Gold for Cyber Criminals?

Virtualization technology has been an IT cornerstone for organization for years now. It revolutionized the way organizations can scale up IT systems in a heartbeat, allowing then to be more agile as opposed to investing into dedicated “bare-metal” hardware. To the outside untrained eye, it might seem that there are different machines on the network, while in fact all the “separate” machines are controlled by a hypervisor server. Virtualization plays such a big role nowadays that it isn’t only used to spin up servers but also anything from virtual applications to virtual user desktops. This is something cyber criminals have been noticing too and we have seen an increased interest in hypervisors. After all, why attack the single virtual machine when you can go after the hypervisor and control all the machines at once? In recent months several high impact CVEs regarding virtualization software have been released which allowed for Remote Code Execution (RCE); initial access brokers are offering compromised VMware vCenter servers online, as well as ransomware groups developing specific ransomware binaries for encrypting ESXi servers.

On the 25th of May VMware disclosed a vulnerability impacting VMware vCenter servers allowing for Remote Code Execution on internet accessible vCenter servers, version 6.5,6.7 and 7.0. VMware vCenter is a management tool, used to manage virtual machines and ESXi servers. CVE-2021-21985 is a remote code execution (RCE) vulnerability in the vSphere Client via the Virtual SAN (vSAN) Health Check plugin. This plugin is enabled by default. The combination of RCE and default enablement of the plugin resulted in this being scored as a critical flaw with a CVSSv3 score of 9.8. An attacker needs to be able to access vCenter over TCP port 443 to exploit this vulnerability. It doesn’t matter if the vCenter is remotely exposed or when the attacker has internal access. The same exploit vector is applicable for CVE-2021-21986, which is an authentication mechanism issue in several vCenter Server Plug-ins. It would allow an attacker to run plugin functions without authentication. This leads to the CVE being scored as a ‘moderate severity’, with a CVSSv3 score of 6.5. While writing this blog, a Proof-of-Concept was discovered that will test if the vulnerability exists; it will not execute the remote-code. The Nmap plugin can be downloaded from this location: VMware disclosed. Searching with the Shodan search engine, narrowing it down to the TCP 443 port, we observe that close to 82,000 internet accessible ESXi servers are exposed. Zooming in further on the versions that are affected by these vulnerabilities, almost 55,000 publicly accessible ESXi servers are potentially vulnerable to CVE-2021-21985 and CVE-2021-21986, providing remote access to them and making them potential candidates for ransomware attacks, as we will read about in the next paragraphs.

Ransomware groups are always trying to find ways to hit their victims where it hurts. So, it is only logical that they are adapting to attacking virtualization environments and the native Unix/Linux machines running the hypervisors. In the past, ransomware groups were quick to abuse earlier CVEs affecting VMware. But aside from the disclosed CVEs, ransomware groups have also adapted their binaries specifically to encrypt virtual machines and their management environment. Below are some of the ransomware groups we have observed.

Figure 1. Screenshot from the DarkSide ransomware group, explicitly mentioning its Linux-based encryptor and support for ESXi and NAS systems

McAfee Advanced Threat Research (ATR) analyzed the DarkSide Linux binary in our recent blog and we can confirm that a specific routine aimed at virtual machines is present in it. 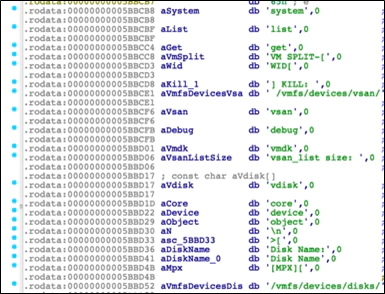 From the configuration file of the DarkSide Linux variant, it becomes clear that this variant is solely designed to encrypt virtual machines hosted on an ESXi server. It searches for the disk-files of the VMs, the memory files of the VMs (vmem), swap, logs, etc. – all files that are needed to start a VMware virtual machine.

Babuk announced on an underground forum that it was developing a cross-platform binary aimed at Linux/UNIX and ESXi or VMware systems:

The malware is written in the open-source programming language Golang, most likely because it allows developers to have a single codebase to be compiled into all major operating systems. This means that, thanks to static linking, code written in Golang on a Linux system can run on a Windows or Mac system. That presents a large advantage to ransomware gangs looking to encrypt a whole infrastructure comprised of different systems architecture.

After being dropped on the ESXi server, the malware encrypts all the files on the system: 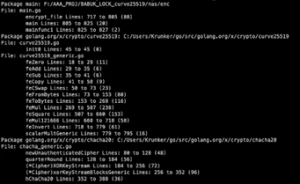 Overall, the decryptor is poor as it only checks for the extension “.babyk” which will miss any files the victim has renamed to recover them. Also, the decryptor checks if the file is more than 32 bytes in length as the last 32 bytes are the key that will be calculated later with other hardcoded values to get the final key. This is bad design as those 32 bytes could be trash, instead of the key, as the customer could make things, etc. It does not operate efficiently by checking the paths that are checked in the malware, instead it analyzes everything. Another error we noticed was that the decryptor tries to remove a ransom note name that is NOT the same that the malware creates in each folder. This does not make any sense unless, perhaps, the Babuk developers/operators are delivering a decryptor that works for a different version and/or sample.

It is not only ransomware groups that show an interest in virtual systems; several initial access brokers are also trading access to compromised vCenter/ESXi servers on underground cybercriminal forums. The date and time of the specific offering below overlaps with the disclosure of CVE-2021-21985, but McAfee ATR hasn’t determined if this specific CVE was used to gain access to ESXi servers. 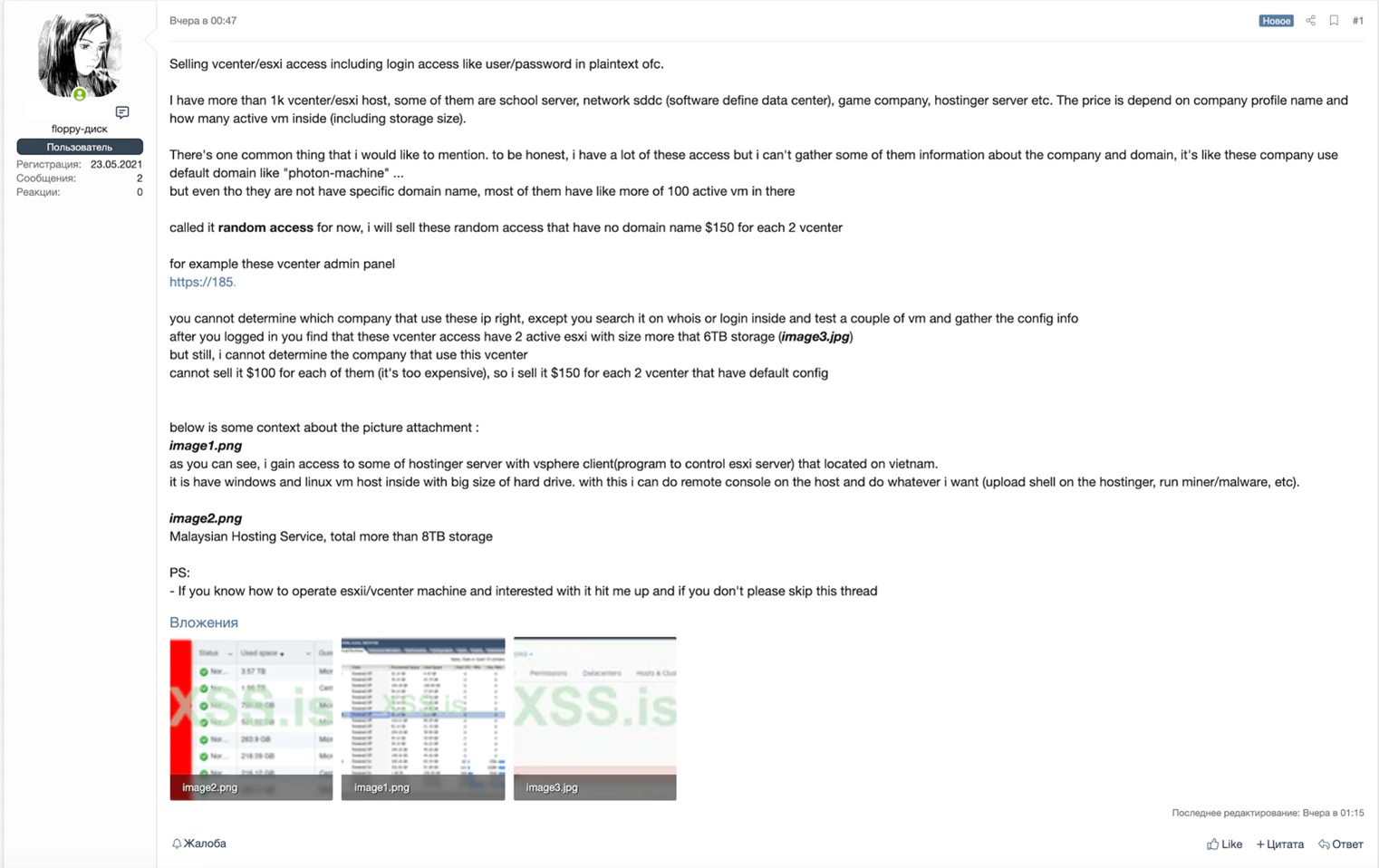 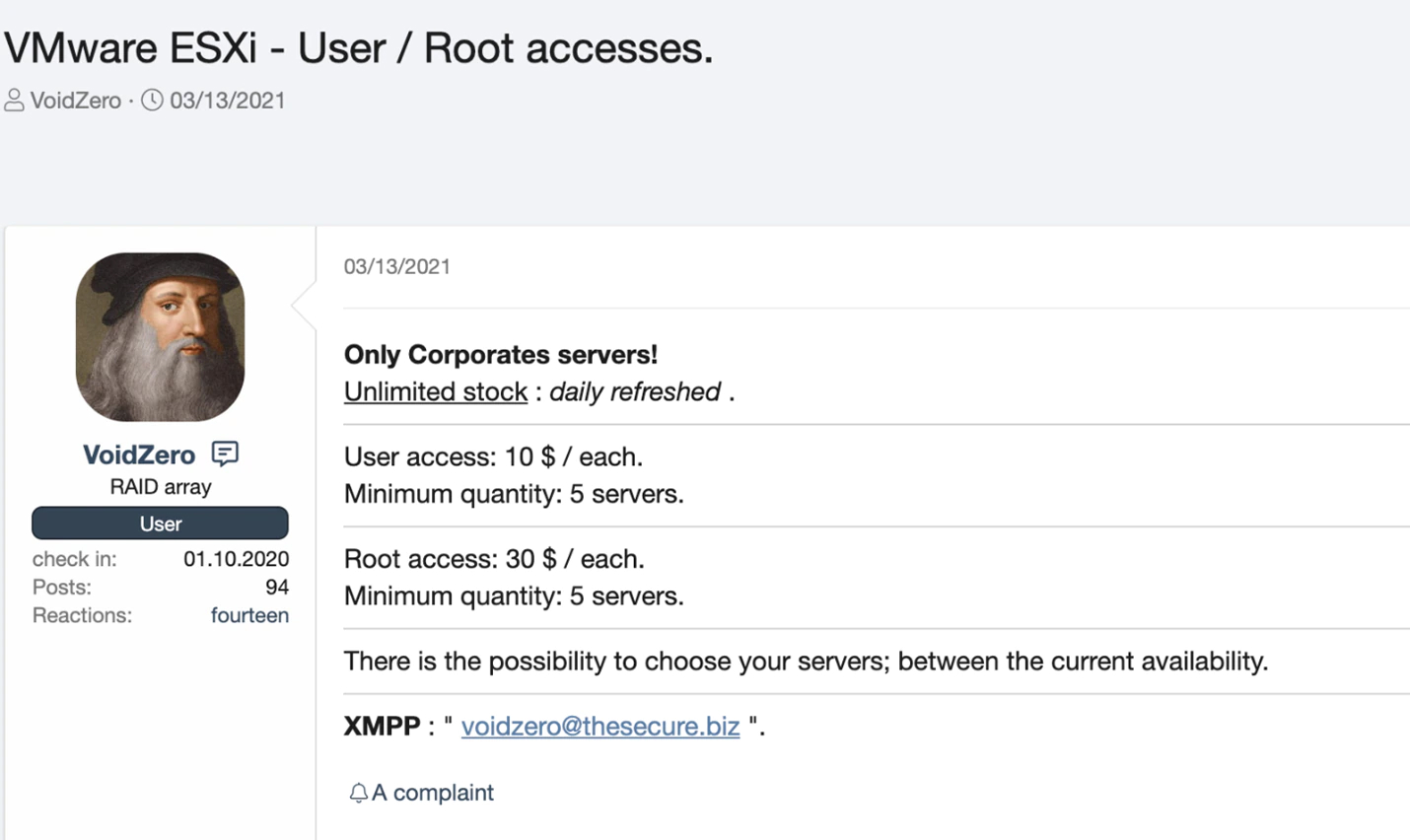 However, we do understand that VMware infrastructure is often installed on business-critical systems, so any type of patching activity usually has a high degree of impact on IT operations. Hence, the gap between vulnerability disclosure and patching is typically high. With the operating systems on VMware being a closed system they lack the ability to natively install workload protection/detection solutions. Therefore, the defenses should be based on standard cyber hygiene/risk mitigation practices and should be applied in the following order where possible.

Virtualization and its underlying technologies are key in today’s infrastructures. With the release of recently discovered vulnerabilities and an understanding of their criticality, threat actors are shifting focus. Proof can be seen in underground forums where affiliates recruit pentesters with knowledge of specific virtual technologies to develop custom ransomware that is designed to cripple these technologies. Remote Desktop access is the number one access vector in many ransomware cases, followed by edge-devices lacking the latest security updates, making them vulnerable to exploitation. With the latest VMware CVEs mentioned in this blog, we urge you to take the right steps to secure not only internet exposed systems, but also internal systems, to minimize the risk of your organization losing its precious VMs, or gold, to cyber criminals.