During the end of May 2022, independent security researcher reported a vulnerability (assigned CVE-2022-30190) in Microsoft Support Diagnostic Tool (MSDT), which could be exploited to execute arbitrary code when MSDT is called using URI protocol. The URI protocol ms-msdt:/ could also be invoked from the malicious word document, which when opened by the victim, would allow malicious code to execute on the target machine with the privileges of the calling application. In response to the reported vulnerability, Microsoft released the advisory and guidance on disabling the MSDT URI protocol. Subsequently, the vulnerability, was patched in the June security updates released by Microsoft. Since then, this vulnerability has been found to be exploited by multiple state actors in targeted attack campaigns.

At Trellix, we are committed to protecting our customers from upcoming and emerging threats on the network inclusive of those that are found being exploited in the wild. Trellix Network Security Platform’s (Trellix NSP) Intrusion Prevention Research Team strives to build advanced detection features , improving product’s overall Threat Detection capabilities.

Over the next few sections of this blog, we will highlight couple of advanced detection features in Trellix NSP, which helps in protecting the customers against this and future attacks of similar nature.

MS Word document exploiting Microsoft Support Diagnostic Tool vulnerability ( CVE- 2022-30190 ) was first found to be submitted to VT on 27th May 2022 from Belarus with the file name 05-2022-0438.doc. However, the number 0438 turns out to be the Area code of the region Follina in Italy and hence the name. Exploit document is not found to be connected to Italy in any way.

There is no dearth of instances where one of the MS Office’s core features, Object Linking and Embedding ( OLE ) have been abused as an initial attack vector and CVE-2022-30190 was no different. This was yet another classic example of chaining OLE with another logic flaw to achieve arbitrary code execution on the target machine. Traditionally, Object Linking and Embedding had significantly contributed to building weaponized office exploits, and we believe this will continue to happen. As with previous CVE-2021-40444 and many other exploits, OLE was found to be used for linking the document to the externally hosted object, in this case, html file.

MS Office Open XML specifications mentions that an Office Open XML document facilitates embedding objects or link to external objects which can be specified via relationships. Any embedded or linked object specified in the container application ( OOXML document in this case ) must be identified by its unique ProgID string. As per the specifications, this string must be used to determine the type and the application used to load the object data. An excerpt from the document specifications is as shown below:

As documented in the ISO-29500-4 specifications ST_OLEType defines the type of the OLE object in document.xml, either linked or embedded and the ProgID=”htmlfile” indicates the type of linked object data. As shown in the CVE-2022-30190 exploit document below, document.xml.rels file with Type attribute specifying relationship as “oleObject”, Target attribute set to the OLE object link and TargetMode set as external. This allows the crafted document to link to the externally hosted potentially malicious object and invoke the respective protocol handlers for rendering the object which could lead to the exploitation of potential logic flaws in object renderers.

As we notice the document.xml.rels file, it contains an external reference to the malicious domain for retrieving the html file :

hxxps://www.xmlformats.com/office/word/2022/wordprocessingDrawing/RDF842l.html!. Hosted html file on this domain contains script block with commented lines. This is required for making the HTML file sufficiently sized ( precisely greater than 4KB ) to be able to get it processed and rendered by mshtml.dll.

Subsequently, script tries to invoke PCWDiagnostic package using MSDT URI protocol handler with multiple arguments out of which one argument is IT_BrowseForFile which can take embedded PowerShell script within $( ) as an argument , resulting into code execution. PowerShell script is Base64 encoded and decoded form is of the script is as shown below.

As we see in the decoded payload, the script is intended to run the malicious rgb.exe on the target system. Summarizing the sequence involved in the attack:

Windows system registers innumerable number of URI protocol handlers which could be potentially abused to exploit similar flaws. For instance, search-ms URI protocol handler , used to query windows search indexing feature can be abused by the attackers to connect to the remote SMB share on the attacker-controlled server. However, it does not directly lead to code execution as it requires multiple levels of user interaction, but a query can be crafted to lure the users to execute legitimate looking executables as shown below. Both these of URI protocol attacks were first reported here.

How Trellix NSP protects against Follina

Trellix NSP has been one of the most advance and mature IPS in the security industry. Over a period, we developed some of the cutting-edge features to deal with complex attack scenarios which involved handling encoding, compressions, and complex file formats. Microsoft Office Deep File Inspection and Multi Attack ID Correlation being some of these. We use combination of these advance capabilities to detect entire attack cycle. In the following sections, we will try to understand how Trellix Network Security Platform’s advanced inspection capabilities highlighted above can help correlate multiple low or medium severity events to detect phases in the attack cycle, thereby raising overall confidence level.

OLE File format which was traditionally used in Microsoft office is replaced with Office open xml. Office Open XML (OOXML) is a zipped, XML-based file format developed by Microsoft for representing spreadsheets, charts, presentations, and word processing documents. In a nutshell this means that the whole document is contained in a zip package. Multiple files and directories together form the document. There are directories like [Content_Types].xml , _rels, docProps, which are basic part of all office zip packages, and then there is a directory specific to document type (word directory for docx, xl and ppt directory for xlsx and pptx respectively). For each of the document type the specific directory would contain different files limited to the type. Like in case of a docx type, the ‘word’ directory contains document.xml file which has the core content of the document. Here is a brief overview about important files under these directories:

[Content_Types].xml
This file contains the MIME type information for parts of the package. It uses defaults for certain file extensions and overrides for parts specified by Internationalized Resource Identifier.

_rels
This directory contains the relationship information for files within the package.

_rels/.rels
This is the location where applications look first to find the package relationships.

docProps/core.xml
This file contains the core properties for any Office Open XML document.

word/document.xml
This file is the main part for any Word document.

For Microsoft documents, deflate compression is used commonly. In a nutshell, the files which constitutes the document are stored in possibly encrypted/compressed format inside the zip package. In the figure below, we dissect this structure for document.xml file present under word directory with a hex editor (010 editor) with zip parsing capabilities which will help us to investigate the details – 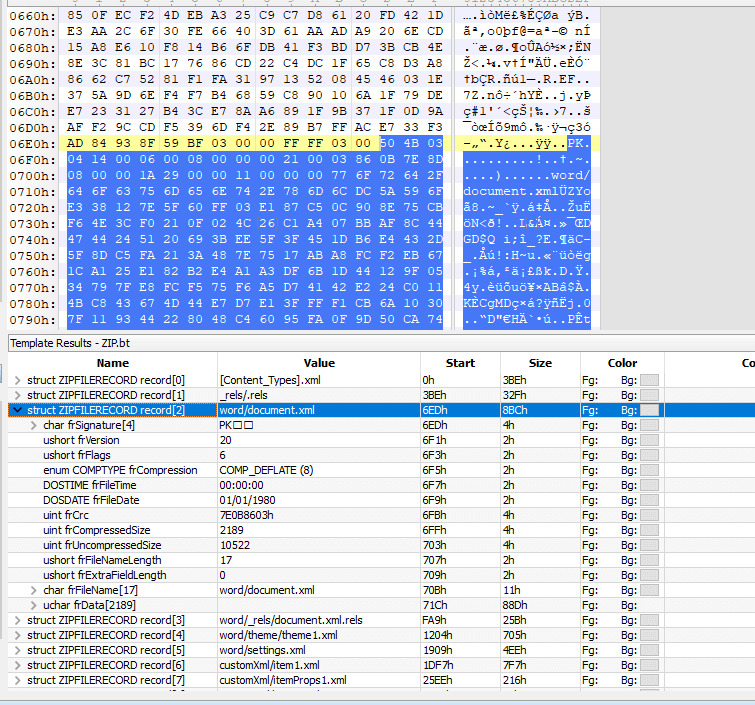 We have seen in the past that different vulnerabilities may require the IPS devices to examine the content of the different files present inside zip package. Same is the case with Follina. As explained earlier, this vulnerability abuses Microsoft OOXML Object Linking and Embedding functionality linking a file to external resource via the relationship file to load malicious content. Hence it requires the detection device to check the external references used in word/rels/document.xml.rels file.

Since this file is present, as a compressed entity in the zip archive, a meaningful detection with IPS cannot be done until the file is decompressed. With NSP’s unique in industry capability, known as Deep File inspection, this is possible.

This is implemented using protocol parsing capability of the NSP. The local file header structure for the specific file is parsed and the compressed data of the file is decoded. This feature can be used by enabling it from the inspection option policy.

Some of the key highlights: deep file inspection

Trellix NSP Attack ID 0x452a8400 - HTTP: OLE Object Linking Detected in OOXML File – uses the Microsoft Office Deep file inspection feature to detect signs of external object linking. However, just checking for external OLE references will not be sufficient until it is ascertained that the external URI does the malicious activity. Since we know that external URI loads the HTML which invokes the MSDT handler in a malicious fashion.

The attack visualization is better when the dots can be connected between different stages of the attack. Multi Attack ID Correlation capability helps achieve this by correlating multiple attacks.

The alert generated using Multi AID correlation is of high confidence and severity and helps security admins to take further actions. This feature is built into Trellix NSP by default and there is no extra configuration required to enable it.

Some of the key highlights: multi attack ID Correlation

We have seen multiple vulnerabilities in the past using exploitation techniques similar in nature and this is yet another addition to the series. In our previous blog, outlining the current state of memory corruption vulnerabilities and the challenges faced in exploiting them, we also highlighted the exploitation strategies of the future and the Follina attack very well validates our prediction. While exploiting different classes of memory corruption vulnerabilities can be eliminated by introducing mitigations as either operating system or hardware level, vulnerabilities exploiting design flaws will remain a challenge. Perimeter and endpoint security solutions will have to evolve to address those challenges by introducing the innovative inspection and detection techniques alongside applying secure software design and development practices during application development.