The incidents, among many others, are reminders that government agencies and critical infrastructure enterprises must improve their cyber defenses through a combination of the implementation of advanced cyber security technologies, enhanced policies and practices, and strengthened partnerships with their governments.

This blog focuses on the Asia Pacific results of a survey commissioned by Trellix and conducted by Vanson Bourne in late 2021 for the Trellix Cyber Readiness Report. Two hundred IT security professionals from government agencies and critical infrastructure providers with 500 or more employees were surveyed in India, Australia and Japan.

What emerges is a snapshot into the state of software supply chain risk and challenges, barriers to implementation of new solutions, the impact and legacy of COVID-19 on cybersecurity, and the current and potential role of government in cybersecurity.

Among Indian and Australian respondents, EDR-XDR solutions appear to be the most difficult for organizations to implement. Seventy-six percent of Indian respondents identified EDR-XDR as either extremely or highly difficult to implement, followed by cloud cybersecurity modernization (72%), MFA (69%) and ZTA (60%).

Seventy-four percent of Japanese respondents identified software supply chain risk management policies and processes as a cybersecurity measure that is extremely or highly difficult to implement, and only 26% claim to have fully implemented such solutions.

Eighty-two percent of Indian respondents, 79% of Australian respondents and 66% of Japanese respondents voice concerns that there has historically been little oversight over how cybersecurity products themselves were developed and where. 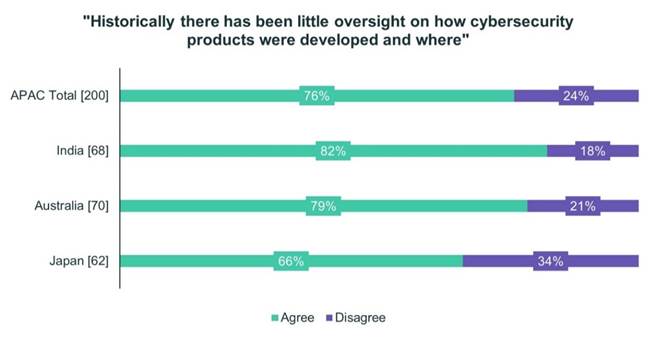 Respondents from India, Australia and Japan agree by wide margins that if government prescribed higher cybersecurity standards, this would raise such standards across the entire software industry. 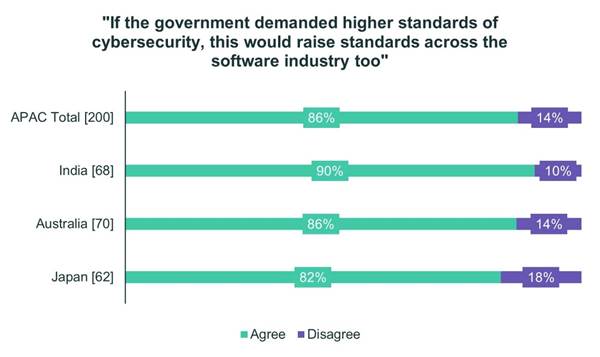 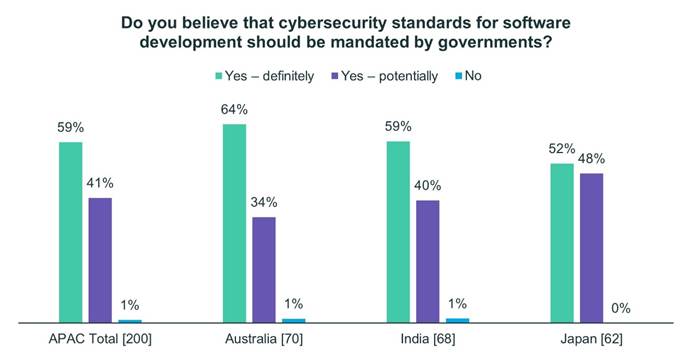 That said, respondents from all three countries have concerns that there could be drawbacks to such standards. Fifty-one percent of Indian respondents believe such mandates could result in government suggestions that are too complex and ultimately too expensive to realistically implement. Around the same number believe that the assertion of such standards could result in less critical thinking on the part of organizations (50%) and just slightly fewer believe the government timelines for these standards could be difficult to meet (43%).

Around half of Australian respondents believe government software security mandates will be too complex (51%) and expensive (47%) to implement and that government timelines will be difficult to meet (49%). Forty-three percent fear standards could result in less critical thinking on the part of organizations.

About half of Japanese respondents are also concerned about the costs (50%) and complexity (47%) of such mandates, with impact to critical thinking and timelines being secondary concerns (by 44% and 37% respectively).

Beyond the aforementioned Software Supply Chain Risk measures, the survey found a number of areas where respondents believe their national governments should be playing a stronger role in strengthening their cybersecurity posture. 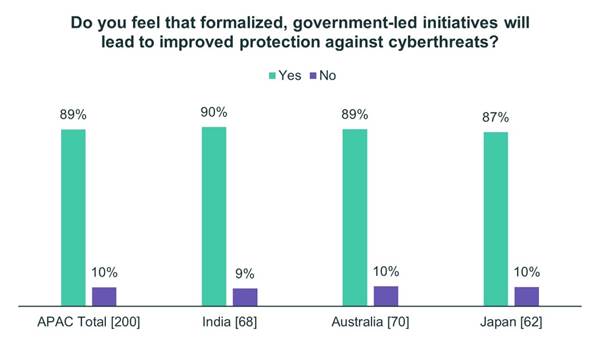 Fifty-nine percent of Indians surveyed believe their government could provide more funding to organizations such as theirs to improve cybersecurity. Fifty-three percent favor tighter cooperation on the investigation of attacks following their discovery, and 44% favored tighter cooperation on cyber incident management while attacks are in progress. Forty-seven percent favor improved guidance on best practices, and 46% favored a combination of incident notification and liability protection to facilitate sharing of attack data between impacted organizations, government partners and industry audiences. Forty-one percent of respondents support greater consequences for malicious actors when caught, and 35% support more regulations of a yet to be determined nature.

Australian respondents showed the most support (50%) for the combination of incident notification and liability protection to facilitate sharing of attack data between impacted organizations, government partners and industry audiences. Forty-six percent favor tighter cooperation on the investigation of attacks following their discovery, while 36% support tighter cooperation on cyber incident management while attacks are in progress. Forty percent support improved cybersecurity funding for organizations such as theirs, 39% favor greater consequences for malicious actors when caught, 37% favor more regulations and 30% favor improved guidance on best practices.

As many as half of Japanese respondents showed support for tighter cooperation on the investigation of attacks following their discovery, followed by more financial support for cybersecurity investments (48%), incident notification and liability protection (47%), tighter cooperation on cyber incident management while attacks are in progress (39%) and improved guidance on best practices (37%).

In the area of critical incident response best practices, there is evidence that governments could play a bigger role in providing standardized guidance on how organizations respond to cyber incidents. Eighty-three percent the Australians, 74% of the Indians and 66% percent of the Japanese agree there currently is no real consistency as to how organizations respond in these circumstances. 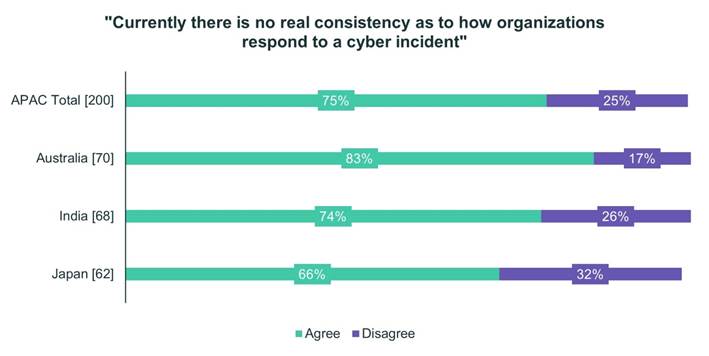 In terms of types of data that would be most useful for their government to share with their organization to help address cyber threats, nearly two-thirds (64%) of Indian respondents valued data about common cybersecurity vulnerabilities in organizations. Fifty-two percent valued data on cyber-attack campaigns in progress, and 48% valued data that is known about different attack vectors and cybercrime groups.

Finally, 85% of Indian respondents, 77% of Japanese respondents and 77% of Australian respondents agree that there are gaps between regulators’ hopes and aims and real-world realities, and that they are often misaligned.