Concerns over cyber-warfare activity in Ukraine has rekindled discussion of the cyber readiness of government agencies and critical infrastructure in Europe. The commencement of hostilities raised the specter of wiper malware in the form of WhisperGate and the more recent HermeticWiper.

Even before the hostilities commenced in Ukraine, countries such as Germany, the United Kingdom and France have for some time been increasingly facing sophisticated attacks on government agencies and organizations providing critical infrastructure services:

This blog focuses on the survey results of the Trellix Cyber Readiness Report conducted by Vanson Bourne in late 2021. Two hundred cybersecurity professionals from government agencies and critical infrastructure providers with 500 or more employees were surveyed in Germany, the United Kingdom, and France.

What emerges is a snapshot of the state of these countries’ cyber readiness in areas such as software supply chain risk and challenges, barriers to implementation of new cybersecurity solutions, the impact and legacy of the COVID-19 pandemic on cybersecurity postures, and the current and potential role of government in strengthening cybersecurity for these organizations.

Forty-seven percent of French respondents reported having fully deployed MFA, apparently placing the French furthest ahead in this area compared to their UK and German peers. Thirty-five percent reported fully implementing EDR-XDR. Cloud cybersecurity modernization and zero trust appear to be behind with only 33% and 30% fully implemented respectively.

Among British respondents, 69% appeared to identify MFA as a highly or extremely difficult cybersecurity technology to implement, compared to cloud cybersecurity modernization (68%), EDR-XDR (66%) and zero trust (63%).

Cloud cybersecurity modernization appeared to be a difficult technology to implement among German respondents, with 79% identifying it as difficult. This was more prominent an issue than EDR-XDR (76%), zero trust (75%) and MFA (67%).

Forty-four percent of French respondents identified challenges related to the tender bidding process as a barrier. These respondents also identified other barriers in the lack of trusted partner vendors (41%), lack of sufficient budget (36%), lack of leadership recognition for the need to invest (35%) and lack of staff resources in-house (35%).

Fifty-six percent of German respondents identified challenges related to the tender bidding process as one of their biggest barriers. Other prominent barriers included the lack of trusted partner vendors (51%), lack of staff resources in-house (48%), lack of leadership recognition for the need to invest (43%), and lack of their own implementation expertise (37%).

Seventy-six percent of U.K. respondents identified software supply chain risk management policies and processes as extremely or highly difficult to implement, and only 39% claim to have fully implemented such practices.

Eighty-seven percent of German respondents, 77% of U.K. respondents and 71% of French respondents voice concerns that there has historically been little oversight over how cybersecurity products themselves were developed and where. 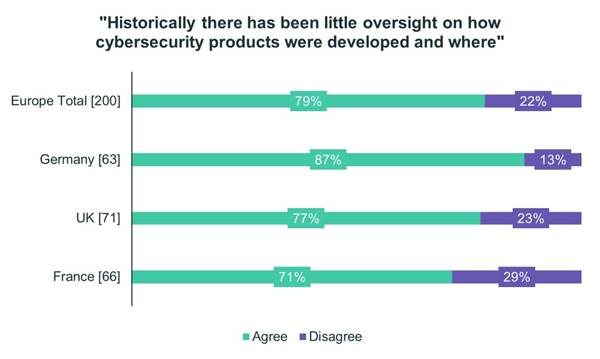 Respondents from U.K., Germany and France agree by wide margins that if governments prescribe higher software cybersecurity standards, this would raise such standards across the entire software industry. 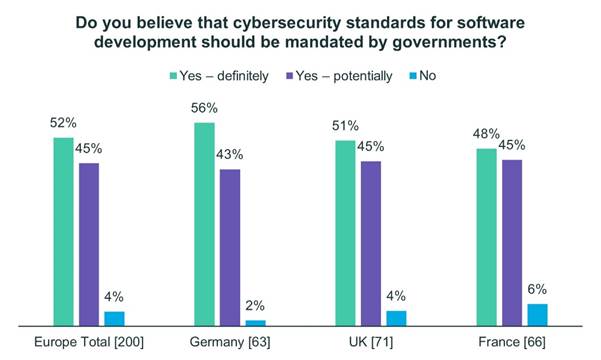 That said, respondents from all three countries have concerns that there could be drawbacks to such standards. Fifty-nine percent of German respondents believe such mandates could result in government suggestions that are ultimately too expensive to realistically implement. Fifty-seven percent believe government timelines will be difficult to meet, and 46% believe government suggestions will be too complex to implement.

Beyond the software supply chain issues, the survey found a number of areas where respondents believe their national governments should be playing a stronger role in strengthening their cybersecurity posture. 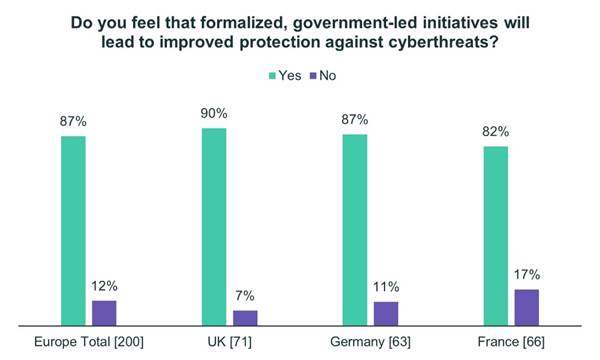 Fifty-two percent of British respondents favored a combination of incident notification and liability protection to facilitate sharing of cyber-attack data between impacted organizations, government partners and industry audiences. Forty-one percent supported tighter cooperation on cyber incident management while attacks are in progress, improved guidance on best practices, and tighter cooperation on the investigation of attacks following their discovery. Only 25% favored more regulations.

Forty-one percent of French respondents supported tighter cooperation on cyber incident management while attacks are in progress and improved financial support for their cybersecurity from the national government. Thirty-five percent supported tighter cooperation on the investigation of attacks following their discovery and a combination of incident notification and liability protection to facilitate sharing of cyber-attack data between impacted organizations, government partners and industry audiences. Around a third (33%) supported improved guidance on best practices, more government regulations (32%) and greater consequences when malicious actors are caught (30%).

In the area of critical incident response best practices, there is evidence that governments could play a bigger role in providing standardized guidance on how organizations respond to cyber incidents. Seventy-nine percent of Germans, 77% of British respondents and 68% percent of the French agree there currently is no real consistency as to how organizations respond in these circumstances.

In terms of types of data that would be most useful for their government to share with their organization to help address cybercrime threats, British respondents said the quality of data being shared and the speed of data being shared were the areas that needed improvement most. Nearly two thirds (60%) appeared to value data about common cyber-attack campaigns in progress above other data. Fifty-one percent valued data on particular cybercrime groups, 40% valued data on known attack vectors and only 29% valued data on common cybersecurity vulnerabilities in organizations.

German respondents ranked the ease of accessing data significantly ahead of the other concerns. As many as half prioritized data on particular cybercrime groups above other data types. Forty-one percent valued data on common cybersecurity vulnerabilities in organizations, followed by data on cyber-attacks in progress (38%) and data on different attack vectors (34%).

Finally, 76% of German respondents, 73% of British respondents and 68% of French respondents agree that there are gaps between regulators’ hopes and aims and real-world realities, and that they are often misaligned.

After two years of the COVID-19 pandemic, respondents were asked how significant the challenge of protecting a remote workforce became in the overall cybersecurity posture of their organization. Ninety percent of Germans, 88% of French respondents and 87% of British respondents believe securing remote access to corporate facilities became somewhat more important to far more important as a result of the pandemic.

Respondents were also asked whether they believed the hybrid-remote work model of the pandemic would remain permanent, phase out entirely or whether it would be a case of seeing whether it works for organizations long-term.

Forty-five percent of British respondents said they believed the hybrid-remote work model would be a part of their organizations permanent work environment. Forty-five percent said they believed it would be a case of seeing whether the model continues to work long-term. Only 10% believe the pandemic hybrid-remote work models will phase out and workplaces will fully return to normal.

Fifty percent of French respondents said the hybrid-remote work model of the pandemic might phase out and that it would depend on how well it works for organizations long-term. Forty-seven percent believe the hybrid-remote work model will not phase out and will always be a part of their organizations’ working environments. Only 3% believe it will phase out completely and workplaces will fully return to normal.