Recent news reports of a “ransomware” campaign targeting Ukraine has resulted in significant press coverage regarding not only attribution but also possible motive. Unlike traditional ransomware campaigns where the motive is obvious, this particular campaign is believed to be pseudo in nature1. In other words, its intention is likely to cause destruction of infected systems since the wiper at Stage 4 simply overwrites data on the victim’s system, meaning no decryption is possible. Whilst the campaign is targeting largely one country, the Trellix Advanced Threat Research team have published an MVISION Insights campaign to track the threat which highlights what indicators have been found in other countries. (Additional details) 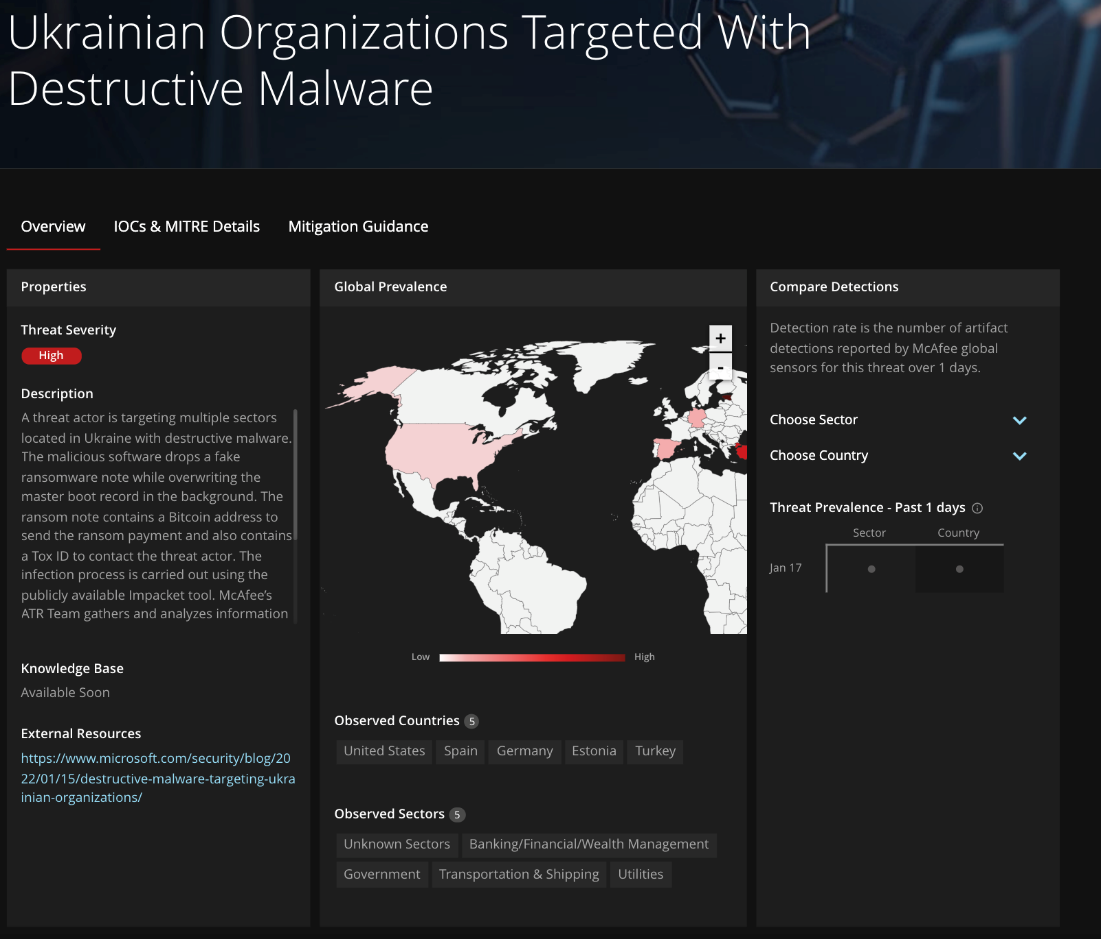 Subsequently we would strongly recommend organizations ensure that their security posture has the necessary controls to protect and detect against the threat. Indicators of Compromise for active hunting are available within the preview, and we have incorporated all known indicators into our products. Furthermore, work continues to ensure that we can identify any new elements to this attack as they arise.

First samples and indicators were reported on Thursday the 13rd of January in the late evening UTC time, which is around 1AM in the morning and onwards in the Ukraine.

The attack consists of three stages, as can be seen below. 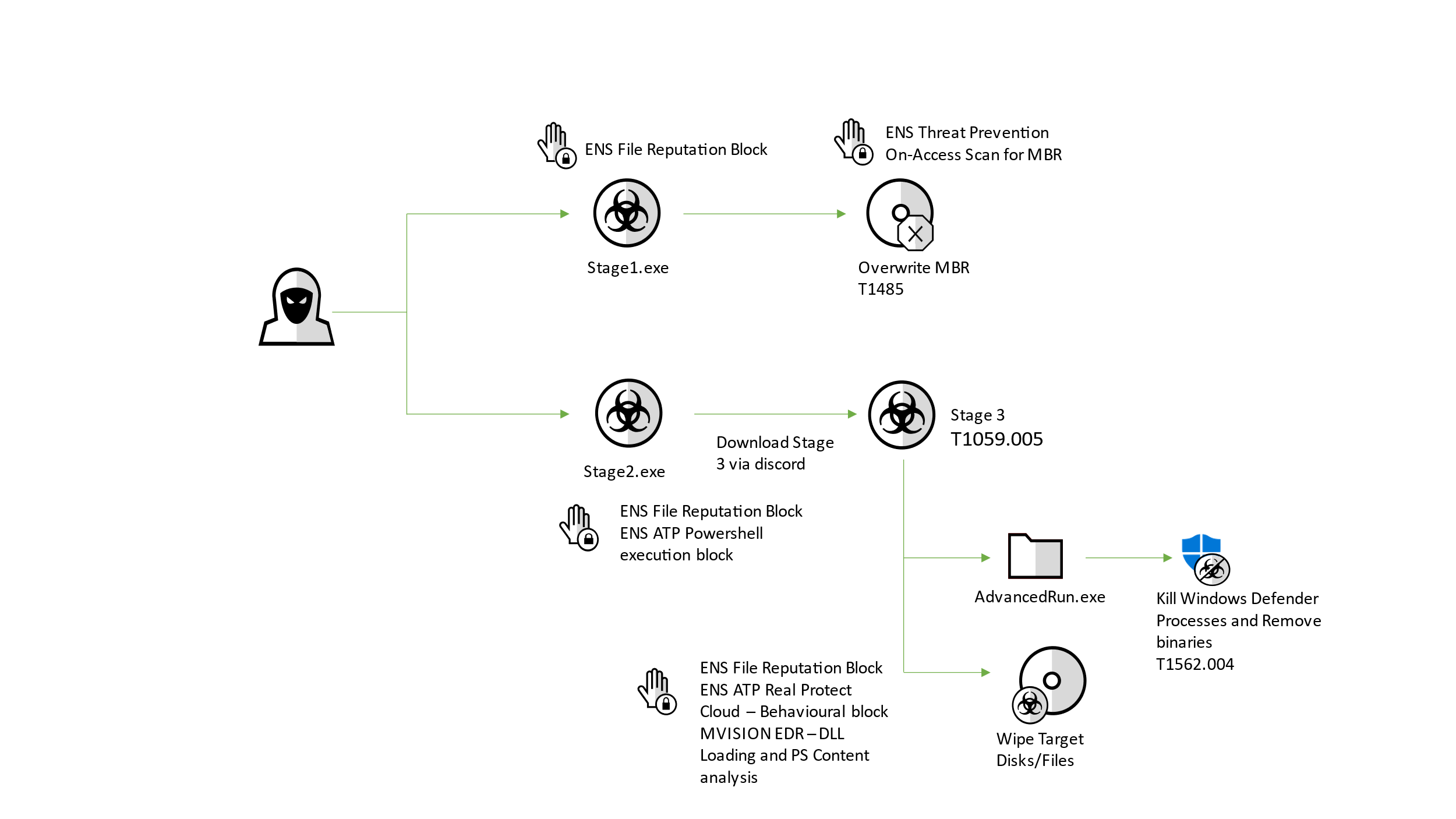 Stage 1: Overwrites the MBR and destroys all partitions Initial files that were discovered were:

The file path of both executables was “C:\”. All jokes aside, the files were actually named like this.

Both files have a destructive character as we observed during our analysis of the samples.

When starting with the first stage, “Stage1.exe”, it imposes itself as ransomware after execution, where it overwrites the Master Boot Record (MBR). After running the malware in a VM and rebooting the machine, the following note appears:

As with most ransomware notes, the usual language is in there: a notification that the device has been encrypted, and that files are being held hostage, together with a payment address to send the demanded amount to, in the requested currency. In this case, which is rare, a TOX ID is included. TOX is used to chat end-to-end encrypted via peer-to-peer connections.

Although different variants were analyzed, the amount and BTC address stayed the same, which in most Ransomware-as-a-Service operations changes, using bit mixers to obfuscate transactions.

Analysing the code, no code was observed to delete volume shadow copies or block the recovery mode boot process, which is often used to remove malware and/or restore operations. These steps are very common in most ransomware samples.

In this below snippet of code, we observe the malware accessing the physical drive, which is where the MBR resides, after which it will overwrite said MBR.

The ‘Stage2’ file is using an icon that resembles the icon of the proxy client “Proxifier”. The authors tried to evade detection by signing the sample with a certificate and mimicking itself as a Microsoft binary belonging to the operating system. The meta-data in that is attached to the file is Russian, as can be seen in the screenshot below. The assembly description and title both equal “Проводник” (or “Conductor” in English), as can be seen in line 24 and 25 in the screenshot below.

When executed, stage2 executes an encoded PowerShell command, which is given below.

Once the base64 encoded command is decoded, the actual command appears: a ten second sleep to delay the execution:

The malware then moves on to download a file, named “Tbopbh.jpg” from a Discord CDN server.

This file is not an image, but rather a reversed PE file. Prior to its invocation, the data is reversed in order. The file is a DotNet Framework based DLL, where the starting point of stage 3 is reflectively invoked, as can be seen in the snippet below.

The static function in the third stage is named “Ylfwdwgmpilzyaph” and resides in “ClassLibrary1.Main” as a namespace and class respectively. The function takes no arguments, nor does it return any value.

This stage is also a DotNet Framework binary, as can be derived from the reflective invocation in the previous step. The used loader is more common, and is generally used to spread commodity malware. As described in this recent Twitter thread, the xClient RAT was also distributed via this loader family.

This loader starts several processes during its execution, after which it uses process hollowing to inject and run stage 4. At first, the loader ensures it has administrative privileges. If not, the process is started again while requesting said privileges.

The first process it starts, is a file it drops to “%temp%\Nmddfrqqrbyjeygggda.vbs”. The content of this file is rather small, as can be seen below.

This excludes “C:\” from Windows Defender’s prying eyes. As stated above, the first two stages were both located in this exact location, meaning their stay will not be detected by Defender’s scans once the exclusion is in-place.

The two processes that are started after that, utilise the same tool to execute commands: AdvancedRun by Nir Sofer. The used version (1.2.2.6, signed on Monday the third of August 2020, at 5:45:51 AM by Nir Sofer), is a legitimate executable that is abused by this malware.

The first execution of AdvancedRun is used to stop Defender, using an invisible window.

The second execution of AdvancedRun is used to completely remove the files of Defender from the system.

The loader then uses the interoperability functionality within the DotNet Framework to execute unmanaged code from a managed context. The list of functions below shows which unmanaged functions were used, in no apparent order. The names of these files are base64 encoded in the loader.

These function calls indicate the usage of process injection. Based on this, the fourth stage can be dumped, of which the analysis can be found below.

The wiper is written in C, and does not contain symbols nor other debug information. The main function is given below, together with some notes.

The malware iterates over all drives, where it wipes all files that match any of the following 191 extensions.

The wiping process is shown in the diagram below. 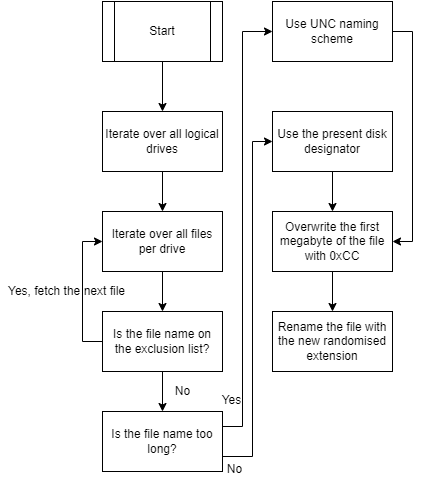 The name exclusion list contains the following file names: “.”, “..”, “$RECYCLE.BIN”, or the value of the environment variable named “HOMEDRIVE”.

Files names which are too long cannot be handled properly using the disk designator, which is why a different approach must be taken there. Microsoft’s documentation describes all scenarios clearly, including the how and why.

Once the wiping has finished, the second function within the main function is called, which ensures the asynchronous execution of the given command and the termination of its own process will lead to the deletion of the wiper’s file, which is not in use anymore at that point in time. The code is given below.

The module name is copied into the command, which runs a minimalised window where a ping request is issued 5 times to “111.111.111.111”, with a 10 millisecond wait time between each request. The output of the command is sent to “Nul”, ensuring the output is hidden. Additionally, the path to the wiper is used as an argument to be deleted forcefully and quietly from the disk. This would fail if the program was still running, which is why the ping command is executed first. The function in the screenshot below executes the given command, and closes all handles. 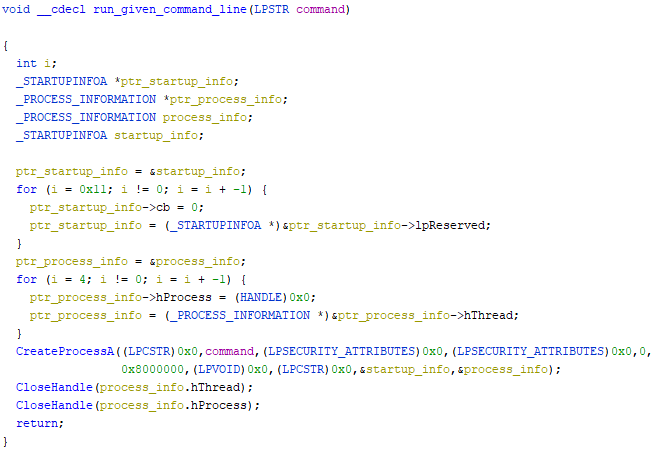 At last, ExitWindowsEx is called, using EWX_SHUTDOWN as the flag, which ensures that all file buffers have been flushed to the disk. The given shutdown reason is network connectivity related. 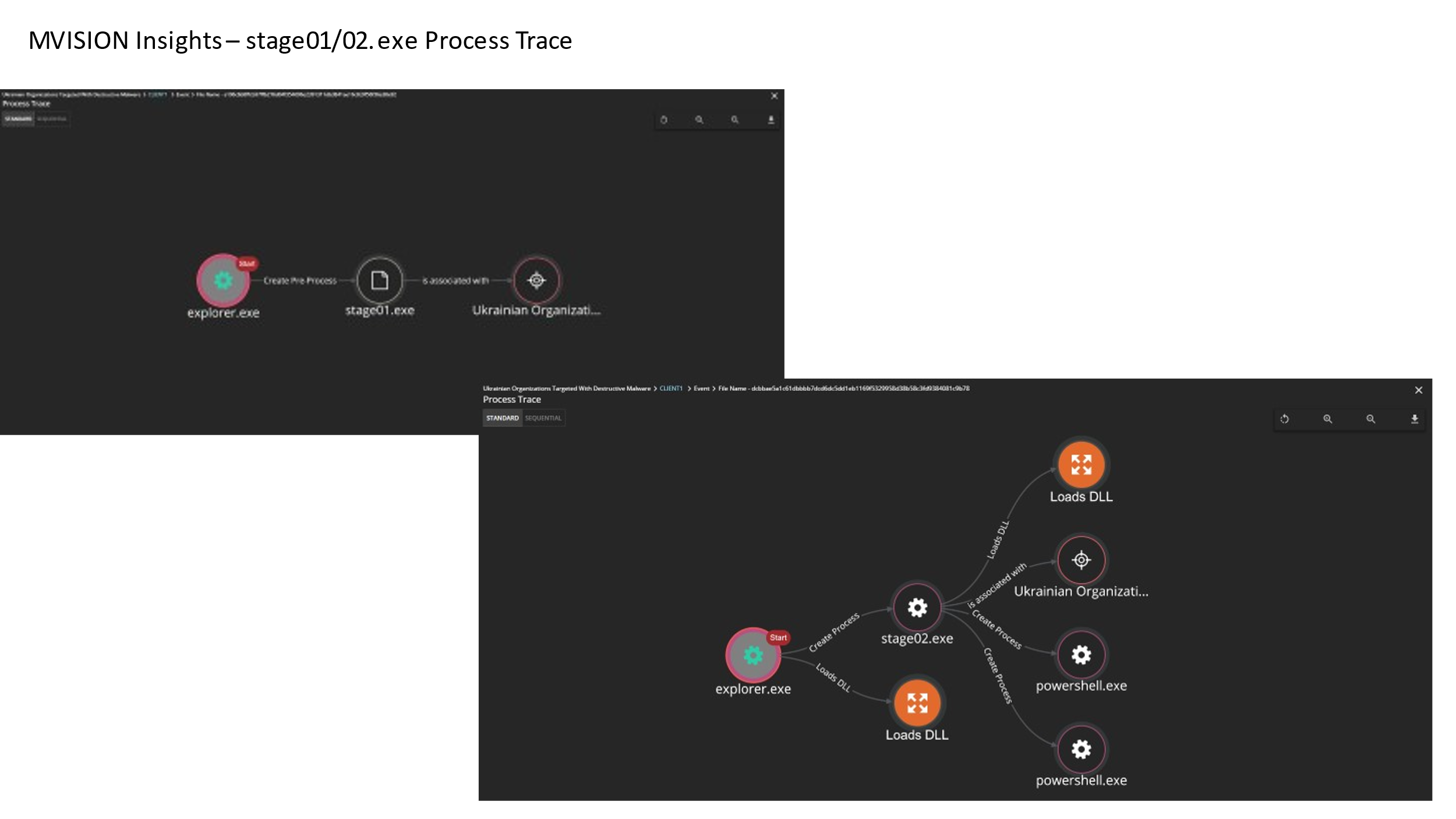 Figure 2: Following are the triggered ENS detections for stage1 and 2

MVISION EDR provides complete visibility into the execution of the processes as follows: 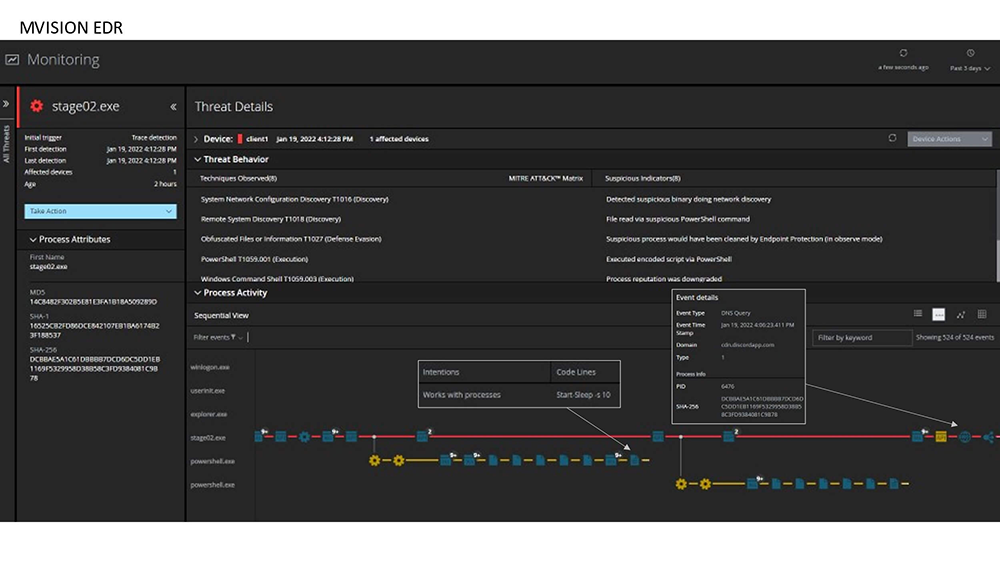 Creating an investigation from the threat detections we can see the use of dual intel tools such as powershell, cmd to execute os commands and make changes to the system and download additional payloads. 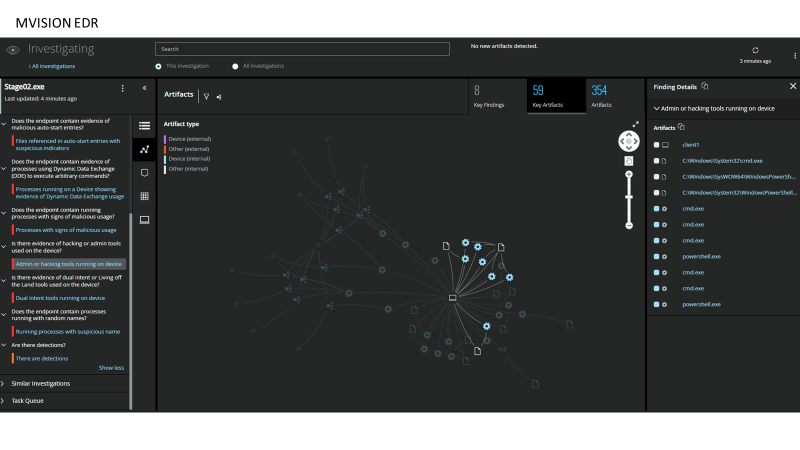