What Is Data Encryption?

Data encryption scrambles data into “ciphertext” to render it unreadable to anyone without the correct decryption key or password. Strong encryption solutions combined with effective key management protect sensitive data from unauthorized access, modification, disclosure or theft, and are thus a critical component of any security program. Data encryption can be employed both for data that is stored (“at rest”) and for data that is being transmitted or transported (“in motion”).

There are two main types of data encryption:

What are data encryption solutions?

Most organizations protect their information with traditional security products such as firewalls, intrusion prevention, and role-based access control applications. These all help prevent data breaches. However, when attackers successfully breach a network—and they inevitably do—data encryption software is the critical, last defense against the theft and exposure of sensitive data.

Most government and industry regulations, such as those protecting consumer privacy and financial data, require organizations to use data encryption tools. Non-compliance can result in stiff penalties. Conversely, use of a strong data encryption solution can protect an organization if a data breach occurs or a laptop is stolen. 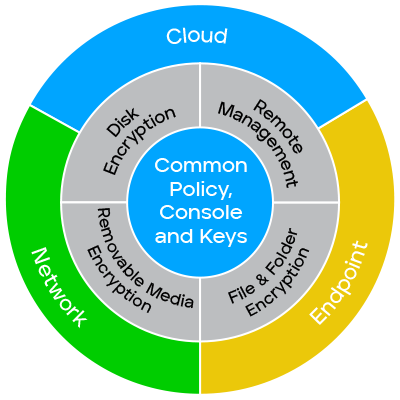 
Two important aspects of data encryption tools are usability and scalability. The data encryption software must be convenient for employees to use—or they won’t use it—and scalable to accommodate an organization’s growth and changing security needs.

Below are additional important capabilities to consider when evaluating a data encryption solution.

Strong encryption standards. Government agencies and private and public organizations around the globe use the industry standard for encryption: the Advanced Encryption Standard (AES)-256. AES replaced the older Data Encryption Standard (DES), which had become vulnerable to brute force attacks, which occur when an attacker tries multiple combinations of a cipher until one of them works. The two well-known certification processes for encryption products or implementations are:

Encryption of static and dynamic data. Static data, or at-rest data, is saved on servers, desktops, laptops, etc. Static data is encrypted either by the file, the folder, or the entire drive.

Dynamic data, or in-motion data, travels over a network or the internet. Email is the most common example. Dynamic data can be protected in two ways:

Granular encryption. While it’s possible to encrypt all data, this can strain IT resources. Instead, most organizations encrypt only the most sensitive data, such as intellectual property and personally identifiable information, like social security numbers and bank account information.

Key management. Data encryption software has key management capabilities, which include creating, distributing, destroying, storing, and backing up the keys. A robust and automated key manager is important for quick and seamless encryption and decryption, which in turn is critical to the smooth operation of the organization’s applications and workflows.

Always-on encryption A useful feature for ensuring that sensitive files stay encrypted is “always-on” encryption, which follows a file wherever it goes. Files are encrypted when created and remain encrypted when they are copied, emailed, or updated.

A unified management console also provides visibility into all endpoints, including a record of each device’s encryption usage. This can avoid non-compliance penalties if a laptop is lost or stolen.


An organization can’t assume that a cloud provider will automatically provide encryption as part of a cloud application or infrastructure service. Encryption uses extra bandwidth and CPU resources, increasing a cloud provider’s costs, so most providers don’t include encryption or offer only partial encryption. In general, encrypting the data is the customer’s responsibility.

What Is the General Data Protection Regulation (GDPR)? What Is DLP and How Does It Work?